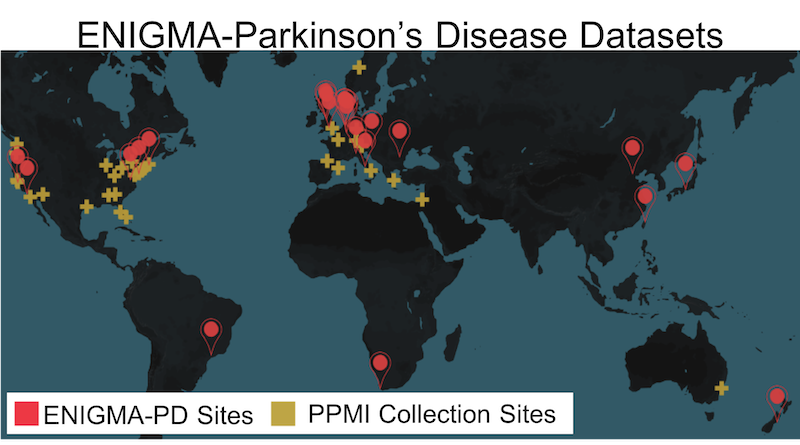 Through our ENIGMA-Parkinson’s Disease initiative, we present the largest and most highly powered neuroimaging investigation of PD by pooling data from 21 sources worldwide. Using advanced neuroimaging metrics, we aim to identify factors that impact disease severity and progression, allowing us to biotype patients into progression and treatment efficacy groups, and in turn, supporting the development of personalized treatments. Using global data to boost power, we tackle pressing questions in PD: How does the illness, symptom severity, and treatment response relate to brain structure, neural connectivity, and functional synchrony? Do genetic susceptibility loci for PD help predict brain decline? What PD subtypes, or clusters, can imaging identify? 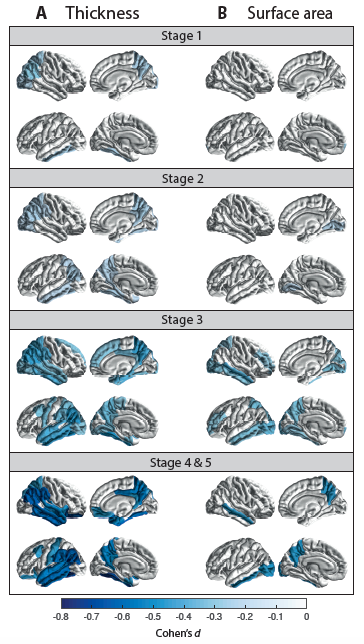 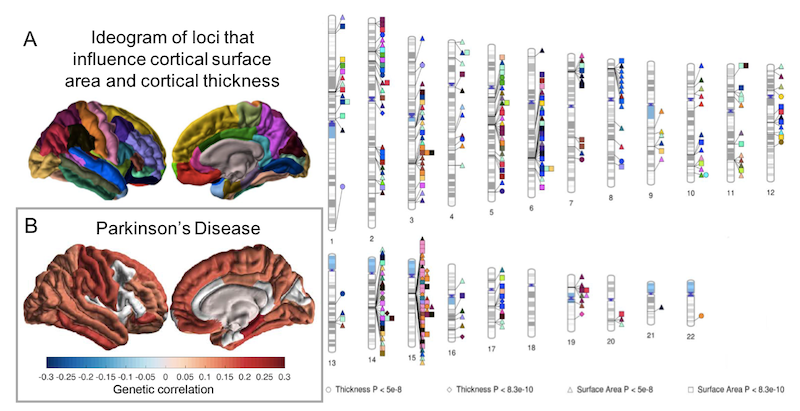 Abnormal brain aging, characterized by neurodegeneration and development of neurocognitive disabilities, is a global health concern, as the population over age 65 increases. In preliminary work supported by an NIA-­funded R56 grant, we computed nomograms (percentile charts) of hippocampal volume, discovered 2 epigenetic loci affecting hippocampal volumes, and identified over 15 genetic loci affecting rates of brain tissue loss with age, demonstrating feasibility for a worldwide longitudinal analysis of MRI data in >10,000 people. Building on these data, we will launch the ENIGMA World Aging Center, a global study of brain aging that leverages our vast and highly productive ENIGMA consortium. ENIGMA’s World Aging Center is a concerted global effort to pool all available data, methods, expertise and capital infrastructure to discover genetic and epigenetic variants that affect brain aging. We focus on biological predictors of aging as they are more mechanistically interpretable. Our long-­term goal is to identify personalized biological predictors of brain structural and functional decline, determine who they affect and when, and assess how they generalize globally. See more here: http://ewac.ini.usc.edu/ 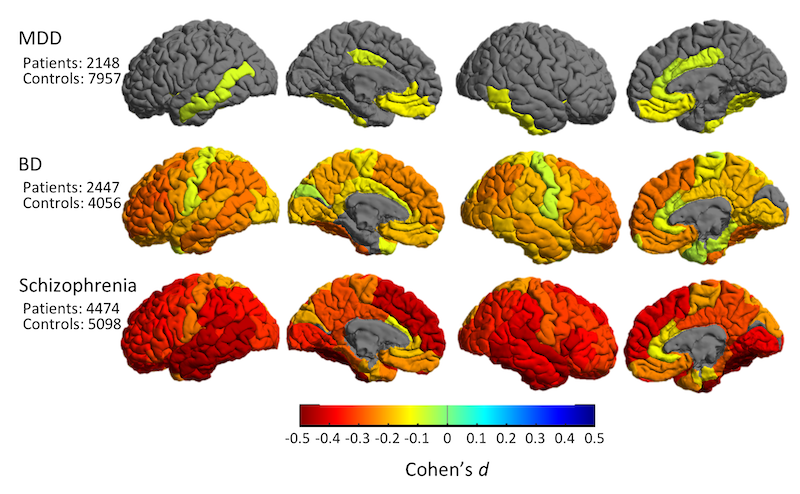 The ENIGMA-Sex Differences is the first, large scale, concerted effort to study sex as a biological variable in human neuroscience through a worldwide brain initiative. Our proposal is a response to the NIH mandate to address the major gaps in knowledge about sex differences in common and debilitating brain disorders. This is a critical grant initiative, as women and men differ in neurobiology, phenotypic presentation of aging and clinical syndromes, and prevalence of psychiatric disease. Specifically, male and female brains differ in size, connectivity patterns and aging trends and also in the prevalence of major depression, anxiety disorders, substance abuse disorders, alcoholism, psychosis, post-traumatic stress, and neurodegenerative diseases such as Alzheimer’s disease. There are significant sex differences in the disorders’ mean age of onset, treatment response, symptom severity and disease trajectory. However, there is limited understanding of the mechanisms and explanatory factors that contribute to these differences. Even the largest brain imaging studies are underpowered to determine if the impact of these diseases in the brain differs by sex. This lack of knowledge - even of basic trajectories of brain disease in men versus women - stalls efforts to identify the primary risk factors in the genome and environment that account for sex differences in disease. Recognizing this major knowledge gap, NIH has repeatedly asked investigators to study sex differences in disease risks, prevalence, trajectories and outcomes.

Our proposal launches a globally coordinated study of brain aging and Alzheimer’s disease (AD). This India ENIGMA Initiative for Global Aging & Mental Health offers an innovative, powerful and cost-effective approach to determine common and unique factors that affect brain aging in both India and the U.S. The worldwide burden of AD is severe and universal; we are in dire need of internationally coordinated efforts to better understand variables that affect brain aging and progression to dementia in diverse settings. The incidence of AD is significantly lower in rural India than in semi-urban regions and both are lower than in the U.S. (Chandra 2001, Mathuranath 2012); this offers a unique opportunity to study factors that may promote resilience to brain aging and dementia. Even so, neuroimaging and genetic studies of brain aging and AD in India are limited - largely due to the challenging research infrastructure of India. As a low and middle-income country (LMIC), India lacks sufficient resources to train highly motivated medical research personnel to change the current landscape of clinical research (Patel 2010). More than 21,000 postgraduates are in medical training positions in India, yet few will be offered sufficient training to conduct novel research and publish in peer-reviewed medical journals. Fortunately, pioneering neuroscientists at the National Institute of Mental Health & Neuro Sciences (NIMHANS) in Bangalore, India, have begun to develop large-scale Indian biobanks with the potential to uncover pivotal insights about global health threats, such as AD, and factors that delay its clinical progression. To address this gap in knowledge, we launch a new initiative, led by highly productive scientists at NIMHANS and the University of Southern California (USC) - two leading institutions in global mental health. Our new India ENIGMA Initiative builds on our thriving ENIGMA Consortium (enigma.usc.edu). Given NIH’s call for better reproducibility in science (Ioannidis 2014), our initiative aims to identify universal and specific biomarkers of brain aging and risk for AD. We will leverage ENIGMA’s successful capacity building strategies to train emerging and established scientists in India to analyze their data with high quality control and precision, in harmonized efforts that support global comparisons. This collaborative partnership between USC and NIMHANS will enable current and future science initiatives, and equip the NIMHANS team with the necessary tools to train new scientists and independently conduct high impact research bridging efforts into numerous international partnerships.

Currently, we are investigating differential trajectories of brain atrophy between men and women across adulthood (ages 45 - 80) in a subsample of individuals with self-reported Indian ancestry in the UK Biobank. We have created normative centile curves (also known as nomograms) for subcortical structures, namely the accumbens, amygdala, caudate, hippocampus, thalamus, pallidum, putamen, and ventricles. These nomograms can provide references for healthy aging of subcortical structures in men and women.

Additionally, we created nomograms for various measures of white matter integrity in a subsample of individuals with self-reported Indian ancestry, again to provide a normative reference of aging in dMRI measures. 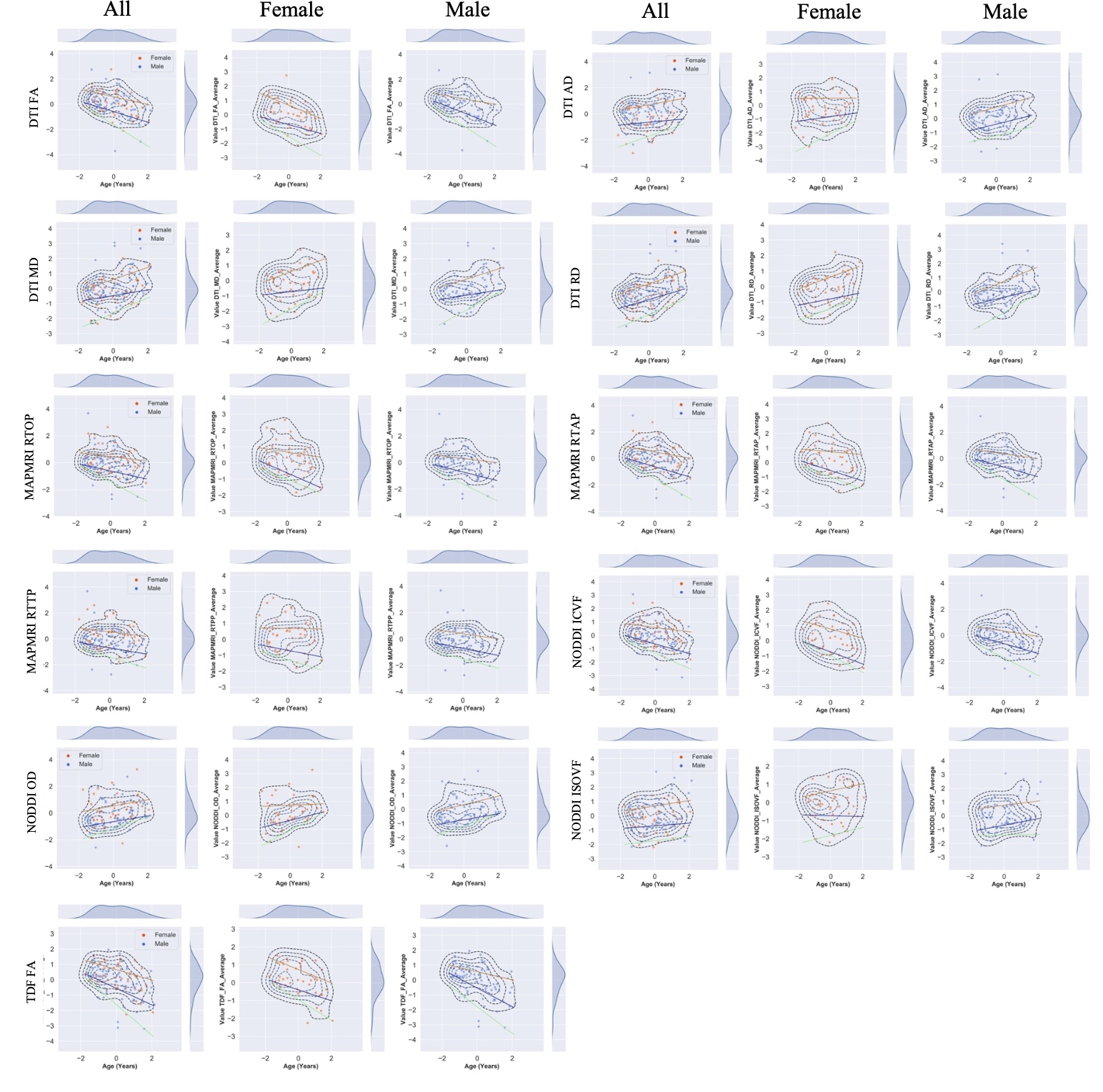 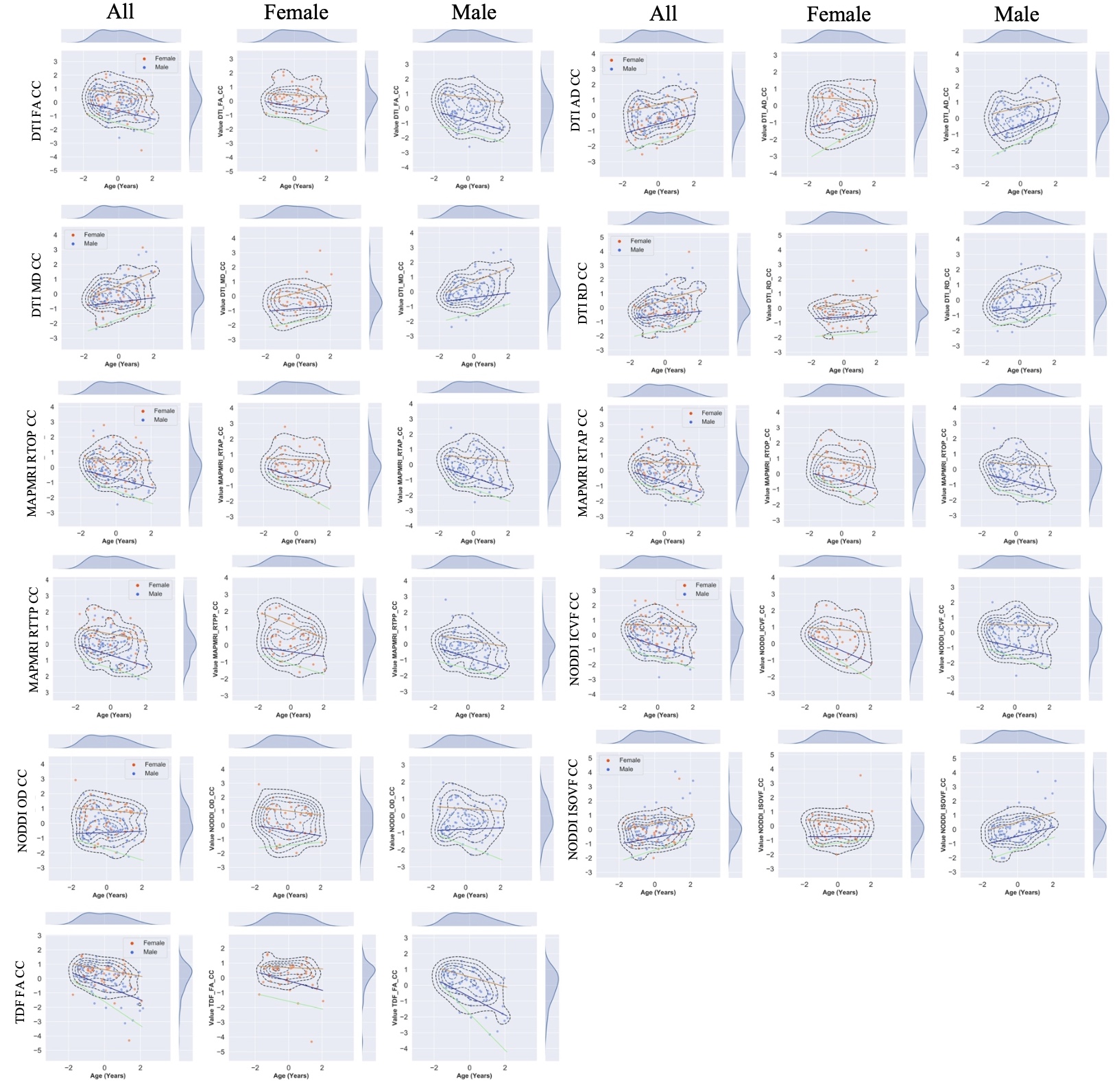