Alzheimer's disease (AD) is a complex and multifactorial disease that ultimately leads to severe memory impairment and neuronal death. The clinical phenotype of AD is highly variable, and an accurate diagnosis is not easy. Consequently, up to 40% of patients living with AD are undiagnosed until the later stages of the disease. Thus, identifying individuals at the earliest point in the disease process, such as individuals with mild cognitive impairment, is a driving motivation of our lab. In addition to archival services and processing of tensor based morphometry (TBM) for the Alzheimer’s Disease Neuroimaging Initiative (ADNI), our work on AD involves collaborations with studies such as the Cardiovascular Health Study, and local projects on early-onset AD and behavioral variant frontotemporal dementia. Our work includes a combination of other advanced imaging techniques such as diffusion imaging (DTI), functional magnetic resonance imaging (fMRI) and joint multimodal imaging modalities. We are involved in determining genetic risk for AD, sex differences in mediating this risk, and impacts of the disease on brain structure through both traditional GWAS tests and other multivariate and machine learning techniques, and analysis of potential peripheral markers of the disease.

Bipolar disorder (sometimes called manic depression) is a debilitating psychiatric illness characterized by sharp changes in mood and energy level. Around 1-3% of the world population meets criteria for diagnosis of bipolar disorder. Our research utilizes neuroimaging data to identify the brain regions most affected by the bipolar disorder. The ENIGMA Bipolar Disorder Working Group consists of 28 international sites, includes over 120 contributing scientists, and is the largest neuroimaging study of bipolar disorder ever conducted. Recent work has focused on finding consistent cortical and subcortical changes across the bipolar spectrum utilizing study samples from around the world. Ongoing projects include investigations into subcortical shape variation, diffusion MRI metrics, and implementation of machine learning approaches to better understand this complex disorder. 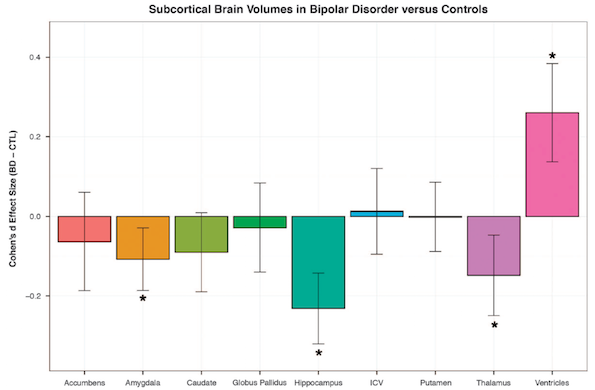 In the largest neuroimaging meta-analysis of brain volumes to date, bipolar subjects were found to have smaller amygdala, hippocampal and thalamic volumes and higher ventricular volumes compared to controls. 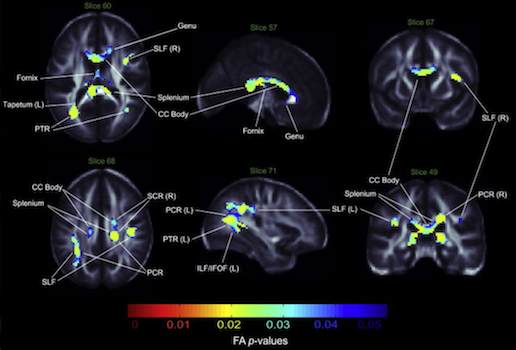 Despite progress in the efficacy and availability of antiretroviral therapy (ART), recent evidence suggests persistent HIV-associated neurocognitive disorders (HAND) and neural injury in a proportion of chronically infected HIV+ individuals on stable ART. We do not yet fully understand the neurobiological consequences of long term survival with chronic HIV infection and ART exposure on the aging brain. Furthermore, the population of HIV infected individuals is highly heterogeneous and there are a host of factors, from substance abuse and comorbidities to viral strain and socioeconomic factors, which may modulate how the disease impacts the brain. This heterogeneity makes existing, relatively small studies difficult to generalize and integrate into a comprehensive model of HIV neurophysiology. Current projects employ both standard MRI and diffusion-weighted imaging (dMRI), in conjunction with more established HIV biomarkers (current/nadir CD4+ counts, viral load), to assess factors that affect brain structure and clinical decline in HIV+ patients. We aim to determine what pathways in the brain these factors affect, and whether these associations are specific to one cohort or generalizable to HIV patients globally. We are studying a diverse set of HIV cohorts including Thai children perinatally infected and developing with HIV and ART, infected adults with a history of drug abuse and Hepatitis C co-infection, as well as elderly infected individuals over the age of 60 who may be at risk for coinciding neurodegenerative diseases. 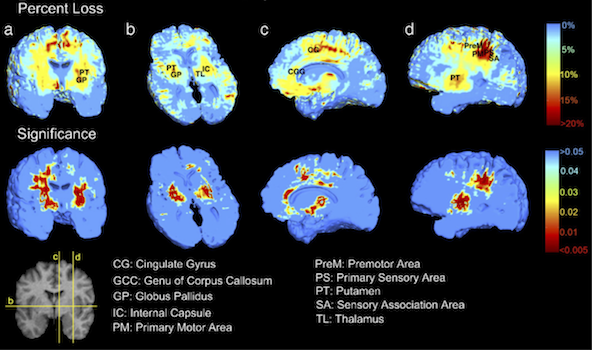 Traumatic brain injury (TBI) is the leading cause of death and disability in children and adolescents, resulting in over 500,000 visits to the emergency room by children under age 19 in the US. Patients can suffer from a wide range of physical, cognitive, and emotional impairments varying greatly in severity. Even in mild TBI, children can experience difficulties in school and are at greater risk for psychiatric disorders. Clinical symptoms can be too subtle to detect, or may be attributed to other causes, but brain imaging methods can identify significant differences in brain integrity. Our novel imaging methods reveal damage to the brain’s white matter tracts – fiber networks that interconnect brain regions, much like highways connect cities. Intact white matter is critical for efficient, healthy brain function. TBI is especially damaging during development. We use cutting-edge brain imaging and data reconstruction methods that we are developing to assess damage to the brain’s circuits in children and adolescents. We are currently conducting a longitudinal study to assess neuroanatomical recovery or decline over time. We have identified a potential biomarker of recovery that identifies a subset of patients who experience progressive degeneration. Such insight into the long-term impact of the injuries will guide clinicians and care-takers in evaluating effective treatments for pediatric TBI, and will reveal factors that promote treatment response and improved outcomes. We are also studying brain circuits in veterans recovering from combat-related brain injury (as part of the DoD-ADNI project). 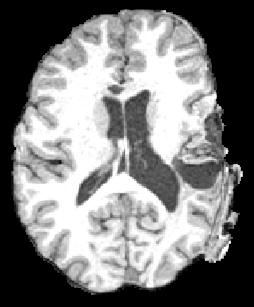 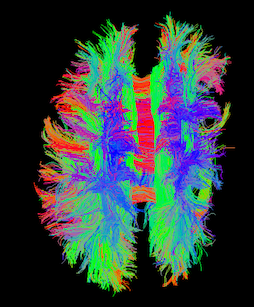